"The Alpe D'Huez of the South-East" is maybe stretching it somewhat, but much like all roads leading to Rome, all bike rides South of London invariably lead to the top of Box Hill. It will be part of the Olympic road race in 2012 too.

I don't know what it is - perhaps its the couple of alpine hair pins, perhaps its the National Trust coffee shop at the top which is always ram jammed with cyclists scoffing flapjacks, perhaps it is the admittedly stunning views, but cyclists love this hill. 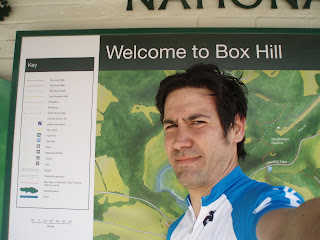 There is a competition to see who can climb Box Hill the fastest. It certainly wasn't me today. People have done it in just over 6 minutes. Simon gives Box Hill a lowly 3/10. As a lot of cyclists do this as part of a loop out of London, it seems a little harsh. I certainly thought so after my ride!

Basically, after a week of sunshine, I woke up early (6.45am!) looking forward to a ride out to the Surrey Hills with some members of my club. Unfortunately I was greeted with a couple of no shows and more importantly, a rain sodden sky. I did manage to meet up with Charlie in Richmond Park who decided he had better ways of spending a Saturday morning that getting cold and wet. We rode around the Park once (about 7 miles) and he kindly showed me out of London on a route he had made up that picked up the Surrey Hills.

Leaving me alone after Hampton Bridge, I promptly took a wrong turn. Realising my mistake, I hoped that Charlie hadn't seen me and set off on the right road. I overtook a couple of cyclists who were also out in the rain and plugged on with my ride.

You can see the Garmin details here: http://connect.garmin.com/activity/83972290 Lap "2" was my climb up Box Hill - basically it was a lovely ride through the Surrey Hills. It got a bit lumpy, I got a bit fed up with the rain, but I plugged on through - which is for me one of the points of cycling. If you go out with friends, you pull each other along and you have an element of competition, it is also social, you catch up and chat whilst riding. If you go out alone, the battle is far more mental. You chose your own pace, you do all the work, you nod at other cyclists, but no-one helps you by allowing you to draft. Sunny at the top too! 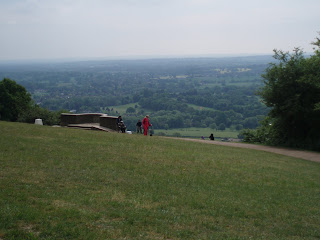 I quite like going out and riding for myself - you feel as though you truly earn your rides, but sometimes, having someone there is also really nice! On the way home, I had a nice experience - a nice chat with a couple who I kept on meeting up with at traffic lights - a nice Cervelo to admire too and a not so nice experience - a driver who deliberately tried to left hook me. He basically waited until I was level with a junction on the left and then deliberately swerved into the turn in front of me. Mind you, the driver (white van man) who was waiting to come out couldn't believe it and through use of appropriate gestures gave me moral sympathy!

Not so many photos - but some comedy ones of my muddy legs here: http://www.flickr.com/photos/100hillsforgeorge/sets/72157626955603784/
youtube taken a different day and still ran out here: http://www.youtube.com/watch?v=bBZvBKaWiyY
Posted by mroli at 15:32