Big day today - Em and I planned to drive around the Peaks (and Yorkshire) and try to collect as many hills as possible. This does kind of go against (a bit), the ethos of the ride (ie, to enjoy riding from hill to hill and to see the country), but we needed to get as many done to tick them off as possible, we only had Sat and Sun in Derbyshire and it looked as though we could pick them off in a nice loop. I also thought that there probably would be a lot of riding if I was doing a LOT of hills anyway.

I kind of know this area a little - I spent time in Nottingham and Sheffield so I have been out into the Peaks, but not cycling - mostly just driving and stopping at little cafes and stuff (possibly a little walking too). Just driving out to Youlgreave where we were staying gave me an indication of the steep hills that awaited.

So Curbar Edge was my first Hill of the day - Simon gives it a 6/10 and I think that was a pretty fair reflection. Pretty easy to find (it is always good when you get a starting location such as a pub)!

I kind of regretted not "warming up" properly before getting underway - I think that I maybe got a little blase about it "just" being a 6/10 and not a problem - I certainly regretted this after about 100m or so!

There were some cool little shaggy haired cows in the fields 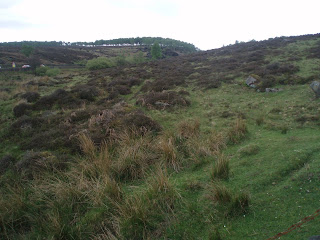 Anyway - a nice way to kick off the day - usual problems spotting the end, so carried on a little bit too far, but it was good to spin out the legs a little, especially with the rest of the day coming up. Simon suggests a climb time of around 8 minutes and I was a little slow out of the blocks today, coming home in about 9