The final climb of a day of a lot of climbing and a lot of driving and it was well worth the effort! 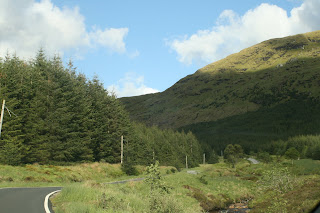 It does seem as though a lot of these climbs that I'm doing in the early evening seem to be beautiful - I don't know whether it is just the light, or the time of day, or the relief that I'm nearly at the end of my having to hurt my legs, but they often seem to be my favourite climbs.

Rest and Be Thankful was very rolling to start with - in a little wooded area on a single track type of road, the road rose and fell in a really nice way initially - just giving you little sprints and then little rests as you coasted down the other side and a little sprint again. Kind of keeps it really interesting though stops you getting in a rhythym. 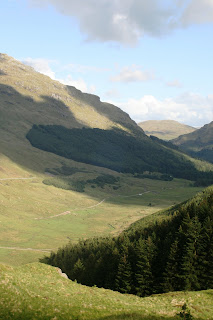 The scenery was incredible too - really towering mountain/hill scapes which loomed up in front of you and were incredibly beautiful - quite grand!

My dreams of having an impeccable riding style were somewhat shattered as the sun behind me cast my shadow out in front of me and I could see just how much my shoulders were rolling from side to side. I'm sure this was just something to do with the hour of the day and what I had done before, but I was keeping an eye on my heart rate just to take it easy without going to much in the red. 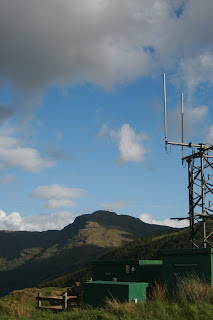 The climb got a bit steeper on the second bit and although these were slopes that I ordinarly probably wouldn't flinch at - I could feel the lactic acid building up and giving me a hard time. I could feel my "form" going to pot which was annoying.

Fortunately it didn't last for ever and there was some respite on the climb with the odd downhill just giving my legs enough rest. 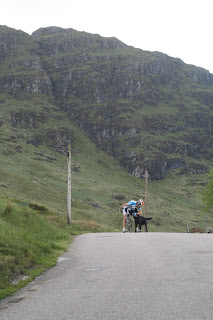 A beautiful climb, quite hard - certainly worth the 6 it was given and a nice one to round the day off with.