This was "it". THE climb. Just driving there was enough to send shivers down your spine - it was incredible scenery 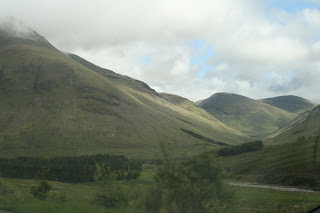 Rating a massive 11/10 on the Warren scale, Bealach-na-ba is described as the "Holy Grail" for road cyclists - the hardest climb you are going to get in the UK. I was fully expecting it to be tough - a steep, long hill - 40 minutes+ of climbing up a big hill in the middle of nowhere in the North West of Scotland.

And it was blowing a holy gale when we got there! The wind was really, really tough - when I got out of the car (after an amazing, but slightly torturous drive!), it almost whipped my bike away from under me as I held it! I had to put it together and try and stop my bottles from blowing away and disappearing - well into miles of unoccupied Scottish space. 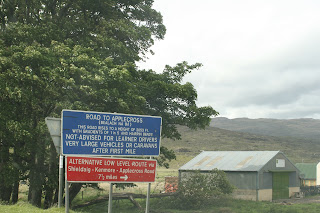 The climb itself starts just off an A road, but you can see how exposed it is straight away - the wind was whipping across me from left to right as I looked at the hill and it certainly looked as though mostly it was going to be against me - as if the slope wasn't hard enough on its own!

The road starts off fairly steadily with big looping turns going up the hillside - this is the bit that seems to go on forever as you just keep plugging your way up the hill - just turning the pedals and marvelling at the incredible scenery. There were a number of motorbikes going up there and even some tourists in cars who had chosen to drive up this isolated, windy, hellish road. I however was going up it on a bike and going increasingly slowly. 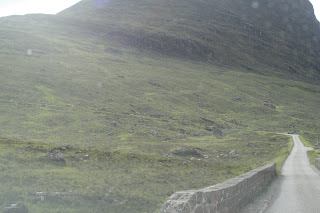 After what seemed like an age, I eventually started going up the "main event" which was the incredible road going up to the main pass. The wind was whipping down the hill still - but rather than being just constant in your face, it was properly blustery - you'd be ok for a moment - and then you'd suddenly be knocked back in your tracks.

My worst moment in all these rides was due to my desire to keep recording my rides for posterity. I knew my helmet camera was going to run out half way up the ride, so I had cunningly stashed some glasses which also had a camera in them in my back pocket. At the appropriate time, I took off my sunglasses, stuck them in my other back pocket, grabbed the other glasses with the camera in, turned it on, hit a gust of wind, went sideways, virtually stopped, almost fell off, nearly went off the side of the road and just managed to save it. 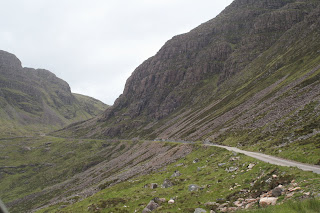 Having managed to put on my reserve camera, I then proceeded to video the road, about 1m in front of my front wheel, so sorry about that.

It was, apart from the physical challenge though, it was an absolutely incredible ride. I don't think I have ridden anywhere that feels just as remote and is as bleakly beautiful as Bealach-na-Ba. It really was incredible, I hope the photos give you some idea of it. 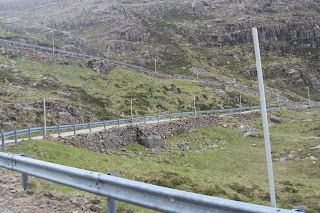 Right at the top there are a series of switchbacks and you get a great look down the valley. I wouldn't say that individually any part of the hill is so steep that it is something I haven't come across before, but cumulatively the sum of its parts, the weather, the distance, the slope, the isolation makes it the hardest challenge I've ridden so far.

I have read about people that have said "ah, it ain't that bad", well I'm guessing they got it on a nice clear day without any wind! I thought it was v tough indeed. 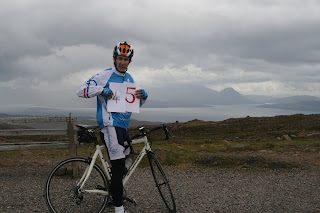 The top gave amazing views and the ride down to Applecross was so hair raising with the cross winds that I literally tip toed it down. Scary, exhilarating and knackering. Well worth all the travel to get here!

I am gutted about the video on the 2nd link being mostly of the road - my back up measures didn't work that well - but if you skip through it there are some incredible views back down the valley.
Posted by mroli at 03:52