Salcombe rises out of the seaside town of Sidmouth - I do like the English coast out of season, there is kind of a faded dignity about them, the quiet before the storm of high season, empty cafes and the sense of a breather before the hurly burly of trying to make a year's money in a short period of time. 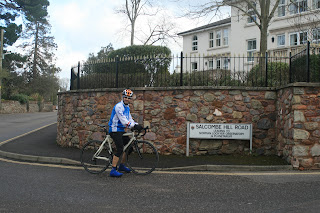 Salcombe Hill itself was even quieter than the seafront on a chilly February Sunday. Only ranked a 5/10 by Simon, I had kind of convinced myself that this was going to be a breeze (especially compared with Crowcombe the day before and I set off in a "cocky" gear thinking I would fly up.

I soon had to rethink that strategy and chose a far more humble gear as my legs and lungs started to complain vociferously.

You start off heading nicely out of Sidmouth and it is all very tranquil. Road is a bit patchy and it is a damn site tougher than it looks. 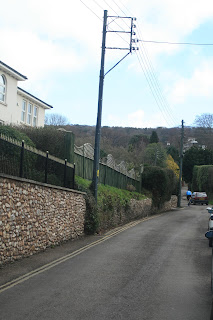 The climb itself turns into a bit of a cracker - kind of through open fields and then you go through an enclosed woodland area which is pretty even in the middle of winter. The climbs is a good steep one too, not as unrelenting and steep as yesterday, but a real challenge all the same. 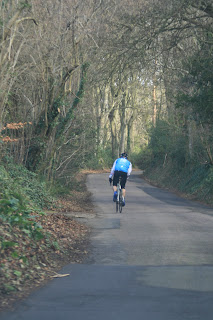 The climb ends by an observatory at the top which is a nice touch (prompting any number of bad gags about seeing stars from the climb itself) and there is also a little car park on the right hand side.

We went along the path from the car park and there is a viewing point with a fantastic view over Sidmouth and the coast. A real cracker - make sure you have a wander along if you do this hill. 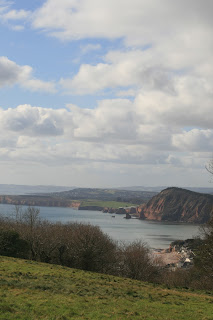