Right you lot out there. You had made me feel properly nervous about this one. Basically with your banging on about it being a complete swine of a climb and really hard all the way up. And you Mr Warren. With your 10/10 and your "really hard from here" and your "hardest section of relentlessly steep tarmac in Britain". 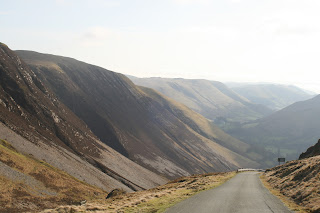 I mean - on the positive side, it is incredibly beautiful round here - the views. Well,  they are PROPER views. The road - well, there was a road, yes, so tick in that box. Its lambing season so they were being all fluffy and cute (probably in the hills) and, well, that's about it.
Ow. Ow. Ow. Ow. Basically, right at the start of the climb, you glide into a little right hander which has a nasty sharp climb up it and then after it for about 1km, it is 9/10%. That's the good part. After that, I had to watch the video to find out what was going on because i had stars flashing through my eyes and my body appeared to decide that the wholly inadequate supply of oxygen that my lungs were providing to my body should just go to my legs and heart and not be wasted on trifling peripherals such as vision. 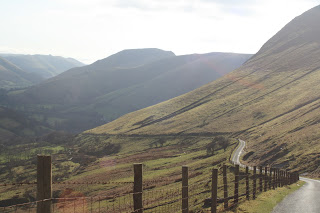 In the saddle, out of the saddle. Both hurt. If I sat on my saddle, my bum hurt. If I stood up, all rather than most, of my legs hurt. So I took turns in standing and sitting just to vary the pain - just to try and trick my brain a little bit. It didn't work. 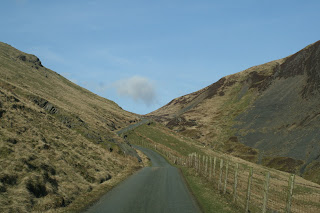 I'm just watching the video back now and there is a bit where I say - "I know its going to get steeper, so I'm not pushing it to save my legs". I was lying. If you listen to me puffing and panting, the reason I'm not pushing it more was that I was already pushing it.
Everytime I looked down at my Garmin, the gradient seemed to trickle up and up. I had come out wearing a long sleeve undershirt and long legs and my spring gloves, because it is, after all March. Apparently though this was ridiculously over cautious as by a mile in I had rivulets of sweat gushing out of every pore on my body. 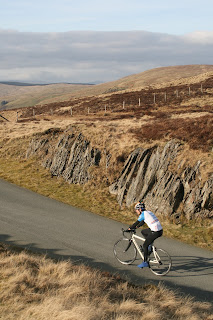 At one point I was seriously thinking about ditching my helmet, gloves, water bottle, everything that I could practically remove from my body and bike to try and make the climbing easy. As Simon says, there is nowhere to recover, when normal hills would go "ah right then. that was a bit nasty. here, have a nice bit of 10% to catch your breath", this hill just goes up and up and up.
I of course, stop talking at one stage, just because it is impossible to. I wanted to yell in pain, but I could not as I didn't have the breath. Near the end there is a road that curves away down the right, but that's not the end, oh no, there is more to go, its just a cruel illusion. 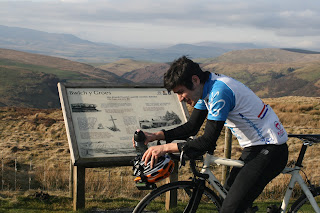 My heart was thudding in my chest, I was trying to breath as long and deep as I can. On the video, it sounds as though I am suffering from asthma terribly. I'm not, my lungs were just not big enough to cope. At one point I have to cough and that in itself almost made me fall off the bike as it was half a second of air that I wasn't getting into my lungs. It just goes on and on and on and on and on......
If I lived here, I would climb Bwlch Y Groes every day, from any one of the three sides until I cracked it and could glide up it. I would then find a pro bike team that rode mountain races and show off. But I don't. So I won't. But my legs will remember this climb if there is such a thing as muscle memory and probably go on strike if I ever try and climb it again.
An absolute brute of a climb. Yeah, yeah, beautiful. Still a brute.
Youtube here: http://www.youtube.com/watch?v=ob2czShVMA0&list=UU_-Huk3Gbwz9QNbiVD1X_jw&index=5&feature=plcp
Flickr here: http://www.flickr.com/photos/100hillsforgeorge/sets/72157629680300879/
Garmin here: http://connect.garmin.com/activity/159004598
Posted by mroli at 08:13