I haven't been to Cheddar Gorge since I was at primary school. I remember it being incredibly exciting - Cheddar Gorge and Wookey Hole and getting my Mum a present (a rather politically incorrect "rules of my kitchen" printed on local made paper). A thriving tourist location - especially compared to the more remote climbs I have done! 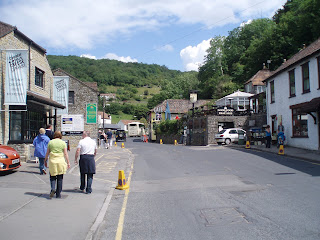 I was staying near Bradford Upon Avon for a stag do - we were playing golf at Cumberwell Park on the Friday afternoon, so my friend Archie and I got down there early doors (well, earlyish) and set off for a ride from the course about 10ish.

I had planned a route that studiously avoided all A (and most B) roads and the folly of such a route was highlighted about 2 minutes into the ride when I had a "coming together" with a car along a very narrow single track road. Luckily my round posterior took the force of the blow and no damage was done to me (a little more to the car). As you can see - I was loaded up! 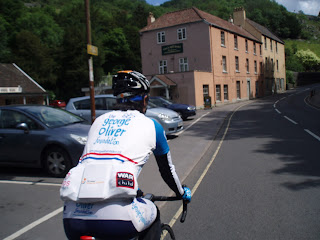 A little more cautiously, Archie and I continued on our way and marvelled at the steepness of the hills around this location - some real nasty 25% brutes were encountered and our progress (which we had optimistically assessed as being around 20mph) was much closer to around 15mph! 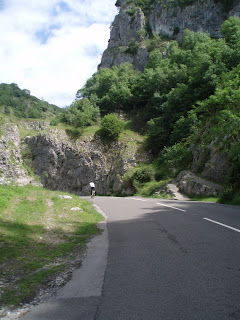 We then got to, up and through Cheddar Gorge. It really is incredibly beautiful (even if quite busy with tourists) and was a really enjoyable ride. It is fairly long, with only 1 real ramp of any difficulty in it, but a good constant test of the legs. 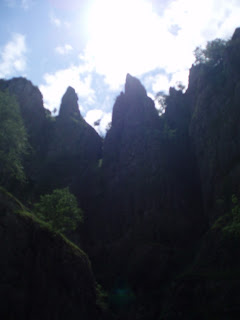 Also, you can't help but look around in awe at the steep green gorge slopes either side of you - probably a more dramatic Winnats Pass, but Winnats Pass being more beautiful.

I was conscious as I rode up that Archie was riding one handed taking photos of me - I wanted to put time into him to emphasis my hill climbing ability, but he stuck to his task diligently. Swine. 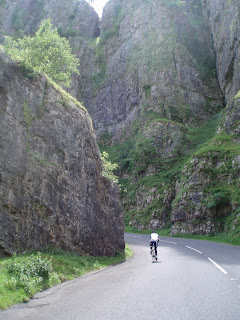 And thank you Archie for being cameraman.

A really good ride, which was topped off by cycling back to the golf club in rapid time using the more "direct" guidance of the Garmin allowing us a much faster cycling time back. Just in time for tee off.
Posted by mroli at 14:39