2 nights out on a stag do, pouring rain, stinking hangover, no sleep.

Must be time to climb a hill! 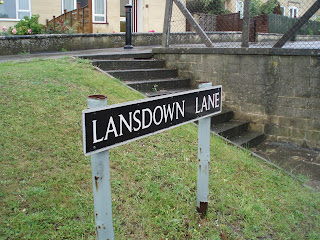 I had planned to cycle into Bath, ride up the hill, take some photos, ride down again and hop on the train back to London. As I woke up, I saw torrential rain, thought better of the riding into Bath and somehow, managed to squeeze my bike into my friend Ben's mini.

He dropped me off at the bottom(ish) of the hill - it all became very familiar to me. The previous day, we had been to Bath racecourse and had marvelled at the steep hill that the cabs had to take us up to get there. Well, I was going up that same hill - different road, but same hill. 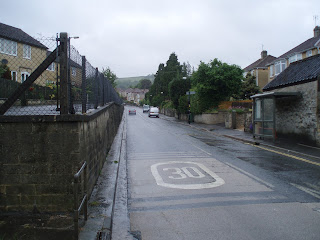 By the time I had ridden to the start of the hill (a good mile from where I was dropped), I was soaked. I got my bearings, made sure that I was going up the right hill (didn't fancy doing it more than once), took my sunglasses off - normally I leave them on as they stop the rain drops hitting my eyes, but they were getting water-logged, turned on the video camera (which failed to work due to the amount of rain!), put the camera in my left hand and headed up the hill. 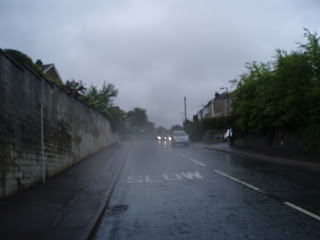 To be honest, I didn't think that much of the hill. It may have been because I had water streaming in and around me (it was like riding a bike through a waterfall most of the time!), but also because it didn't seem THAT exciting - it was a bit nondescript with neither lovely scenery, quiet roads or particularly steep rises - I would have chosen to do the hill through the City for something a bit "different".

Balancing with soggy hands, taking photos and cycling up the hill, trying to keep up a commentary for the video camera (that couldn't record anything) was enough of a task, as was fighting the hangover and actually, when I got to the top, I got a nice view of Bath Racecourse where I had picked 0 winners out of 7 races.

Looked a bit different without the 7000 people there though. 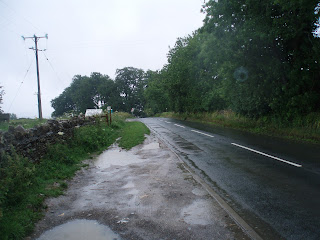 Job done - it was cycle down the hill (where the unecessarily large rain drops hurt my eyes as they hit them), onto the train with a hungover stag and a soggy, if not unpleasant ride back once in London. Where someone opened a car door on me, resulting in a cut up right hand - the hazards of city riding....

Probably not my finest day on the bike - but a hill done is a hill done.